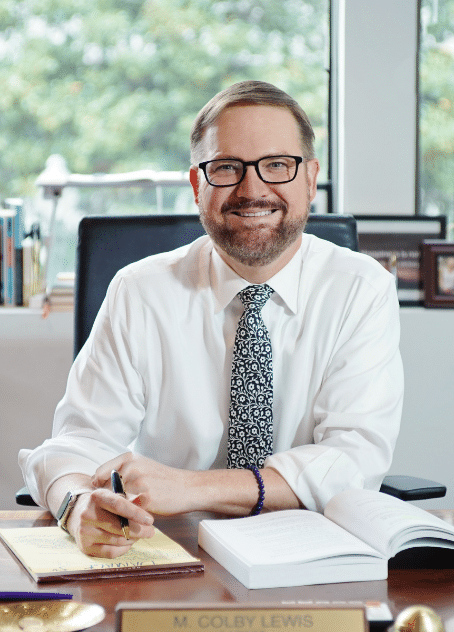 Colby has extensive experience handling a wide variety of personal injury claims, including wrongful death. His experience extends to insurance claims, construction defect claims, commercial litigation, and more. Colby represents clients in civil litigation and trial. From complex class action cases to single-occurrence disputes, Colby is tenacious in his representation. Most importantly, he has a proven track record of getting results for his clients; your case will be no different.

With well over a decade of success on his record as a civil trial lawyer, Colby has earned the respect of both his clients and his peers. He has also earned a number of honors, including selection for inclusion into the Texas Super Lawyers, a “Superb” rating from AVVO, and an AV Preeminent peer review rating from Martindale-Hubbell. He is also a member of the Texas Bar College.

Colby Lewis knows that anything is possible with conviction, hard work, and perseverance. After reading To Kill a Mockingbird as a young boy, Colby was inspired by Atticus Finch, who stood for what is right and fought for the little guy. Colby sought to be an advocate for all the Boo Radleys and Tom Robinsons—fighting for justice became Colby’s primary motivation.

He worked tirelessly, balancing numerous jobs to finance his education. When Colby was accepted into The University of Texas at Austin, he made it his mission to absorb as much knowledge as possible. He pursued three different undergraduate degrees in philosophy, political science, and computer science while engaging in as many extracurricular organizations as possible. Through grit and tenacity, Colby became the first member of his family to graduate from university, with honors.

Soon thereafter, Colby became one step closer to his lifelong pipedream of becoming a lawyer when he was accepted to the University of Houston Law Center. Colby soaked up this opportunity for all that it was worth. He was the first student at the UH Law Center every morning and the last one to leave every night, spending countless hours in the law library from dawn till dusk. Colby’s life is the definition of relentlessness: he tirelessly works towards the realization of his goals. Colby fights for what is just and right, and he takes no shortcuts when it comes to achieving the results his clients seek. This is why his motto is relentless representation—Colby approaches every case as if it were his own.

After years of studying and preparation in law school, Colby hit the ground running. From the outset of his career, Colby has been a go-getter, hyper-focused on achieving justice for his clients. One of his first cases was as a member of the Lead Plaintiff’s Houston Trial Team going up against Enron following one of the largest corporate scandals of the modern day. Colby made a name for himself by aggressively representing all those individuals who were hurt by the wide-reaching and long-standing economic consequences of Enron’s off-the-books accounting and wide-scale fraud. To this day, fifteen years later, he hasn’t stopped sprinting to the finish line for his clients.

Know Your Enemy and Know Yourself: in a Hundred Battles, You Will Never Be Defeated.

Prior to starting the Law Offices of Colby Lewis in 2015, Colby was defense counsel for titans of industry, representing some of the largest insurers and companies in the world. Over the course of his first decade of legal experience, Colby witnessed firsthand the unscrupulous methods used by insurers; he grappled with the reality that he helped advance countless exploitative tactics that companies utilize. He couldn’t sleep at night knowing his hard work did not benefit the everyday people he dreamed of fighting for since his childhood. In that moment, he remembered why he’d become a lawyer in the first place; it wasn’t to line the pockets of corporations, it was to fight for individuals. Life came full circle.

Colby left his cushy job as a partner at a large regional law firm and returned to his roots as a plaintiff’s lawyer, representing the underdog against titans of industry. Colby’s experience on both sides of the courtroom makes him uniquely qualified to analyze prospective cases, determine their likely outcome, and develop a plan for moving forward. Colby knows how these bad actors think and operate. More importantly, He knows how to counter the strategies and mechanisms that insurers and companies use in their attempts to limit or altogether eliminate any road to recovery for people whose lives have been irreparably harmed. Insurers and companies only have their best interests in mind. Colby Lewis is here to always protect what is important to you. He stands with you—to help you overcome the challenges you face from your injuries or loss.